I believe it was once a bad “Three’s Company” skit from the 70’s that I saw on one of those retro cable channels where Suzanne Somers character was packing her belongings in her jacket to save time. Of course the irony in the humor was that the ditzy blonde would often come up with good ideas in the midst of the windstorm. In retrospect this was one of them as now functionality takes center stage and is almost on par with fashion when it comes to travel.

ed to function, and it seems like comedy if you ever watch a show from that era. No ID’s required, paying in cash at the counter, smoking on the flight, etc. It was truly a different age. Now there are TSA lines that sometimes are longer than the plane flights and despite having to remove almost all your clothing prior to boarding to get through security, simple clothes like leggings to simplify the process are frowned upon. Part of the solution might be clothing that can also double as a transport for your belongings to help you compensate for the 2+ hours you will spend from when you leave the seat of the car that takes you to the airport to time you sit down in your plane seat. The “Airport Jacket” is one of the new trends aimed at doing exactly that, and the age of wearable luggage was born.

An Australian company is currently trying to raise funds to market their airport jacket on Kickstarter and they may be on to something. Firstly, they have accomplished their first objective of making it fashionable, because at first glimpse I couldn’t tell it was pulling double duty as luggage. It may not be a Canada Goose or North Face but it doesn’t ostentatiously stand out as ugly either.

Honestly if you’re on the East coast and making a short one-hour hop from NYC, Jersey, or Boston or better yet in LA going up

to San Francisco, this may not be a bad idea where you seriously will spend more time in line than you will on the flight. Pack your laptop, under limit fluid bottles and makeup, and some personals and you’re ‘good to go’ to get through the day. Most of all you’re smiling at those making their way to the baggage claim as you “ditz” your way to your Uber of Lyft waiting for you. Sometimes the blond squirrel does find a nut. 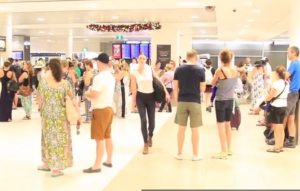