Bruno Mars has completed about three quarters of his world tour that when completed will have spanned 344 calendar days, 90 tour dates, and

17 countries. Including shows at all four NYC-area arenas — MSG, Barclays, Prudential, and Nassau — within days of one another and he will book end the tour with the other largest market in the US, four show at the legendary Fabulous Forum in LA. The show has catapulted the solo star to top of the must see male artist as he backs up his 24 carat album that was released about the same time as the tour got under way. Throw in that performance at the Victoria Secret show (which they are still talking about) and you got the components for someone who’s on the verge of “Ballistic Status” seen by very few solo acts. 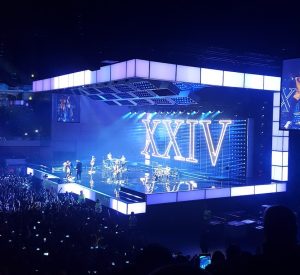 Mars broke onto the scene in 2010 with his multi-platinum album “Doo-Wops & Hooligans” which sold over 6 million copies worldwide. He followed that up with “Unorthodox Jukebox” two years later and repeated the feat with 6million worldwide and 2.5 million in the US. The rise of his popularity actually took an even steeper trajectory after is appearance at the Super Bowl Halftime Show in 2014 which critically acclaimed and introduced him to mill

ions of new fans, piggy backing on the afore mentioned second album and his global #1 track “Uptown Funk” collaboration with producer Mark Ronson. In 2016 Mars had reached ‘Midas Touch’ status where just the name recognition with him as an affiliate either as a lead artist, featured artist, or producer demands immediate attention. This phenomenon truly apparent at the Victoria Secret Fashion show where is live appearance and simultaneous fashion show once again garnered viral popularity with an astonishing 38.5 million views for 24K alone, bolstering his global marketing value and impact.

The 24K Tour has a daunting schedule but Mars his delivered amazing performances that may have left attendees speechless. The combination of stage presence, choreography, lighting, and even a little pyrotechnics gave you that “oh, is over already?” feeling at the end that you always want your audience to have with the final encore. They may have been speechless but not unable to write as the social media buzz has provided fuel throughout the tour and has only gained momentum as it approaches the West Coast culminating in the City of Angels in early November. 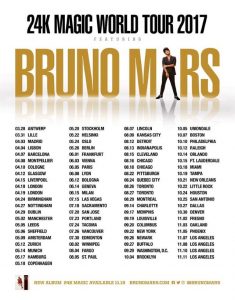 It would be normal for Mars to need a substantial break after the tour ends on November 11 and as a fin I suppose it’s unfair to ask but after seeing the execution on such enormous potential I’m already anxious to see and asking “what’s next?”.